Added to wishlistRemoved from wishlist 0
Add to compare

Added to wishlistRemoved from wishlist 0
Add to compare
$7.00 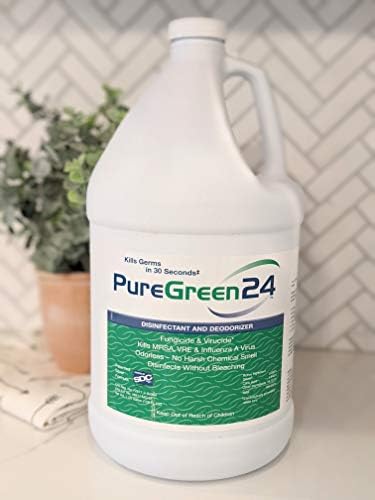 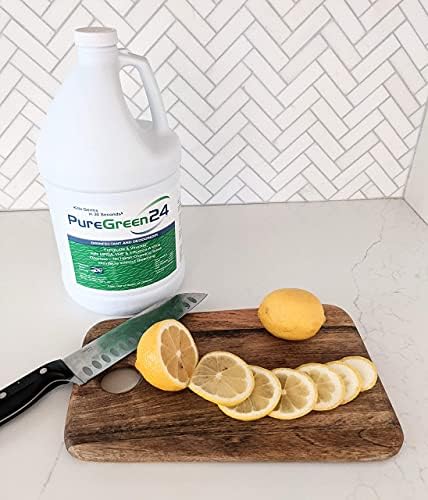 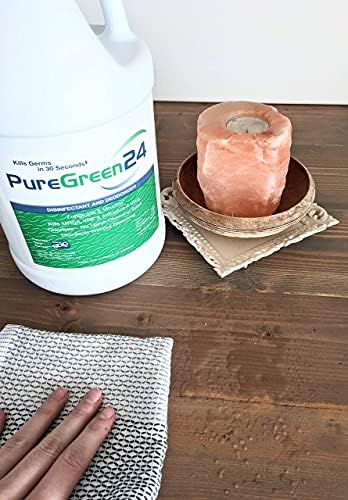 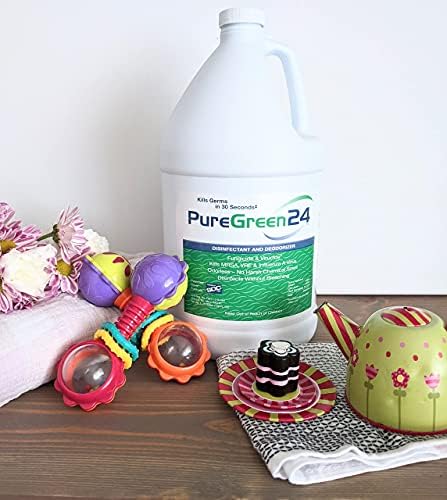 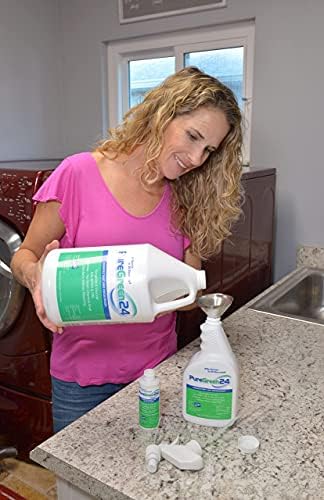 Price: [price_with_discount]
(as of [price_update_date] – Details)

PureGreen24 disinfectant and deodorizer is a natural, non-toxic product, formulated without harming the environment. PureGreen24 products do not put your children or pets at risk. In fact, you can use this odorless product while they are present. You can even use it on their favorite toys.

PureGreen24 has the power to fight and kill 24 dangerous bacteria and viruses including MRSA, Staph, and NoroVirus, Ecoli, Salmonella, and the 2019 and 2020 Flu Bug.

PureGreen24 will continue to kill germs and protect your family for 24 hours.

Ready to use, no mixing required.

PureGreen24 contains no harsh chemicals. It disinfects without bleaching. PureGreen24 manufactured from Silver Ions, Citric acid & Purified water. PureGreen24 is colorless, odorless, and non-staining and is designed for use on hard, non-porous surfaces. No rinsing required for skin contact and no protective gear required. This is a natural product that is safe and friendly to pets & kids.

No ingredients in PureGreen24 are on the California list of toxic chemicals (CA Proposition 65).

Other products, unlike PureGreen24, can contain toxic chemicals like Ammonium Chloride & Bleach which have the following negatives: • Skin contact is to be avoided; harmful if absorbed through skin • These toxic products should not be used on children’s toys, sports equipment, pet crates or surfaces that has skin contact without rinsing • Caustic; may damage plastics, fabrics, vinyl & certain metals.• Harsh fumes • Protective gear should be used • Dangerous and hazardous to use around children or pets.

PureGreen24 is a safe all-natural formula that kills the deadliest of superbugs and everyday germs.
None of the chemicals in this product are considered hazardous by EPA.
PureGreen24 is manufactured from Silver Ions, Citric Acid and Purified Water.
PureGreen24 has the lowest EPA toxicity rating, is non-flammable, non-corrosive, odorless, and non-irritable.

PureGreen24 is safe enough to use on children’s toys that they put in their mouths.
EPA registered for use on sports equipment and children’s toys.
No rinsing needed.
Can be applied in the presence of humans and animals.

PureGreen24 has a residual effectiveness for 24hrs
This product continues to kill the deadly germs for up to 24hrs after your initial application.

PureGreen24 Returns a Portion of Our Profits to Charities

• Olney Theatre Center • F.A.I.T.H. For Animals in the Hospital.

Microfiber cloths are recommended for the application of PureGreen24. Simply “spray and wipe” surfaces to get an even distribution.

For irregularly shaped surfaces, spray PureGreen24 on the microfiber towel until a portion of the cloth is thoroughly damp, and then wipe the desired surface.

PureGreen24 kills deadly germs with Non-Toxic chemicals.PureGreen24 has the lowest EPA toxicity rating, is non-flammable, non-corrosive, odorless, and non-irritable
Safe to use on children’s toys, sports equipment, and around pets
Fast bacterial, fungal, and viral kill times with 24-hour residual protection
Effective against Influenza A Flu Virus, MRSA, Staph, NoroVirus, Salmonella, E Coli, and more
Ready to use with no mixing required

There are no reviews yet.

besthealthsupplies.com participates in the Amazon Services LLC Associates Program, an advertising program designed to provide a means for websites to earn advertising fees by advertising and linking to Amazon.